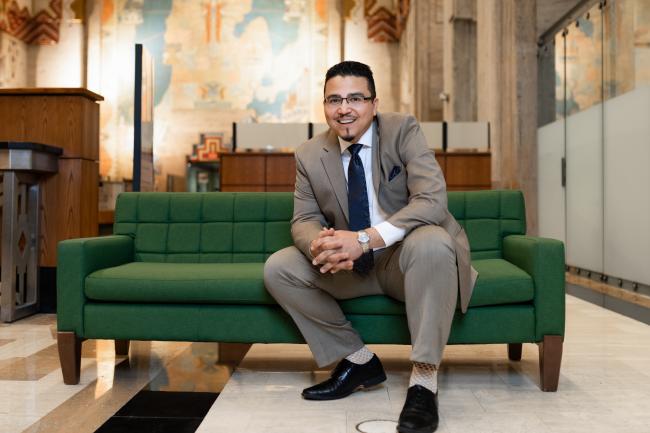 Leonard Savala planned to play football in college, but a diagnosis of Stage 4 cancer during his junior year of high school blocked that path. His mother suggested he enroll at Grand Rapids Community College, where she was pursuing an associate degree.

“When I started GRCC, I was finally in remission after cancer, and I was taking the bus from Wyoming to GRCC several days a week,” he said. “Those were tough days. I was renting out a house while living on my own.”

Savala wasn’t sure what career path he wanted to follow, but he found help from his advisor, Ivette Reyes-Vazquez, and his involvement in GRCC’s Latino Club.

“It was that organization that really helped me stay focused and gave me a sense of belonging,” he said. “I was around other students who understood my experience at GRCC.”

After graduating with an Associate of Arts in 1996, Savala earned a bachelor’s in dietetics and a master’s in agricultural and extension education, both from Michigan State University, and a doctorate in educational leadership from Western Michigan University.

“GRCC gave me the foundation I needed to get where I am today,” he said. “Had it not been for GRCC, I wouldn’t be the person I am today.”

Savala’s workplace experience ranges from a manufacturing assembly line to nutritional educator for the Detroit Urban League to academic services coordinator for MSU’s College of Veterinary Medicine to his current position as the first director of Wayne State University’s Office of Multicultural Student Engagement. He served two terms on the state Commission on Spanish Speaking Affairs and its education subcommittee.

He received the 2021 Diversity, Equity and Inclusion Alumni Award from MSU’s College of Agriculture and Natural Resources -- the most recent addition to honors that include MSU’s Excellence in Diversity Award in 2005, 2013 Education of the Year Award from the Hispanic/Latino Commission of Michigan, and the 2014 Hispanic Alumni of the Year from MSU’s Latino Alumni Association.

Savala is quick to point out many who helped him along the way, including Dr. James Nachman from the University of Chicago’s Pediatric Cancer Center and family friends throughout Grand Rapids.

“I want to encourage lots of people like me who are dealing with, or have dealt with, difficult situations to try to stay positive,” he said.

“I got where I am today because of a lot of support from family and friends. It was a long road, but I wouldn’t change anything.”