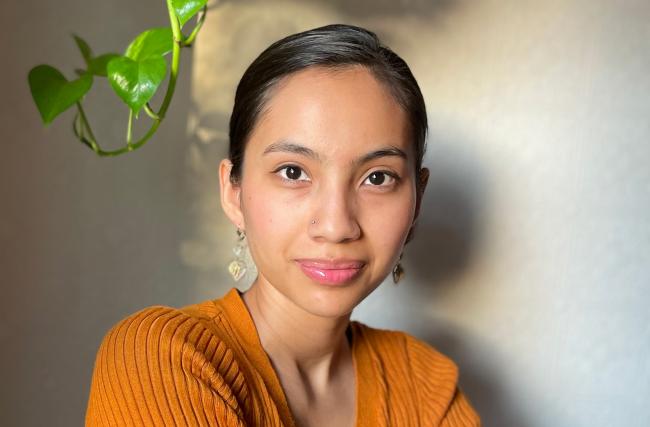 July 25, 2022, GRAND RAPIDS, Mich. -- Wanda Moreno-Aguilar doesn’t graduate from Ferris State University’s Kendall College of Art and Design until the end of this year, but she’s already tackling a large and important project.

The Diatribe, a nonprofit that aims to empower youth through poetry, recently selected Moreno-Aguilar to create a mural on the Farmers Insurance building on Eastern Avenue SE. It’s part of the organization’s 49507 Project, a collaboration that teaches event organizing and commissions community art for and by people of color in the 49507 ZIP code.

It might seem to be a daunting challenge for someone navigating her first year as a freelancer, but Moreno-Aguilar says her time at GRCC helped prepare her for this opportunity.

“Grand Rapids Community College did a phenomenal job introducing the field in the courses, which allowed me to understand what to expect in the industry,” she said. “I learned many skills and techniques I use today from the professor at GRCC. I left feeling satisfied with the knowledge I acquired and fully capable of taking on any task because of the foundation GRCC laid for me.”

Moreno-Aguilar, who will graduate from Kendall with a bachelor’s degree in illustration, would like to work on children’s books some day. She counts seeing her work displayed in GRCC’s Paul Collins Art Gallery among her favorite memories.

“As a first-generation student, I felt that GRCC made it a comfortable space for me to learn and grow as an individual,” she said. “I enjoyed the small-knit community that I could fall back on to have an honest conversation about my career choice and how to help me achieve that. The professors were fantastic and very knowledgeable! It felt like a judgment-free zone for someone who had no idea how college worked.

“I always recommend to anyone who wants to pursue a fine arts career to do so at GRCC.”