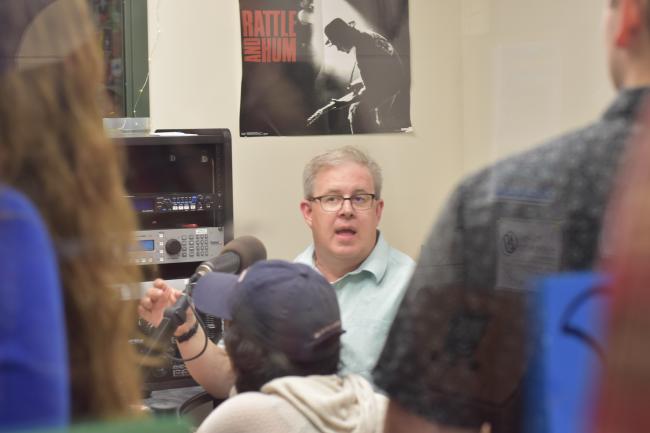 April 12, 2021, GRAND RAPIDS, Mich. – Start at GRCC and go anywhere. Every former student has a story to tell about how GRCC gave them the education and opportunity to be successful. We’re sharing some of those stories, and want to hear yours!

Len O’Kelly spent more than 30 years on the air in radio, primarily in the major market of Chicago. But he credits GRCC for preparing him for a long career in broadcasting, with a second act in teaching.

He has served as a news director and has programmed radio stations in locations in Grand Rapids, but also worked on the other side of the world in Gisborne, New Zealand.

He continues to work in broadcast news and perform voiceover work for television, radio, and film, and is the associate director of Grand Valley State University’s School of Communications.

“I essentially failed out of college my first time around and went to work in the field,” he said. “When I decided that I wanted to finish my degree, it was the advisors at GRCC who helped me to ‘pick up the pieces’ of my first attempt in college, see what I needed to do to finish my Associate of Arts degree, and set me on the right track. Without that first step and that kind assistance I never would have been able to get re-started on my path. I’ve kept that sense of kindness in mind when I advise my own students today.”

After graduating from GRCC in 2000, O’Kelly went back to Lewis University in Romeoville, Ill. – where he first attended – and completed his bachelor’s degree in 2004. He later earned a Master of Arts in Communication from GVSU in 2011 and a doctorate in Media and Information Studies from Michigan State University in 2016.

“I went to GRCC thinking that I may want to teach in the future,” he said. “I was able to meet some incredibly passionate and engaging faculty who truly cared about their students. I was able to see firsthand what good teaching looked like, and it informed the construction of my own teaching and advising philosophies in many ways.”

O’Kelly said he was boosted by a “terrific support network” of his wife, family, colleagues, and professors. “Each of them played a specific role in supporting me, in pushing me forward. I’m indebted to all of them for being there, knowing that I can fall back on them when I need to.

“But it’s just as important to make your own opportunities. From the first day I started in radio I realized the decisions that we make early shape our future. Deciding to take a calculated risk early in my career paid off for me and led me to roles in management. Deciding to take advantage of the opportunity that GRCC provided for me to get back in the classroom put me on the path that led me all the way to having my own classroom. We need to make the most of the opportunities that are presented to us.”

“I had a moment in the Ford Fieldhouse where I thought to myself, ‘I never thought I’d see this day. I posed next to the ‘4.0 or Bust’ sign in my cap and gown, since I managed exactly that. Not bad for a guy who failed out the first time!”