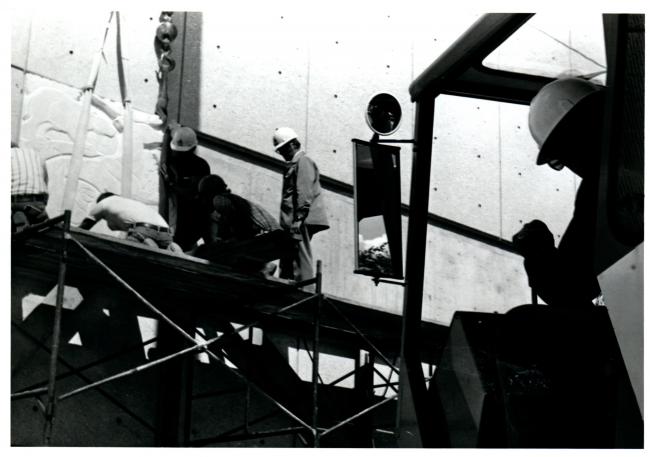 May 23, 2021, GRAND RAPIDS, Mich. -- Start at GRCC and go anywhere. Every former student has a story to tell about how GRCC gave them the education and opportunity to be successful.

You are familiar with Lumen Winter’s artwork. He created the beautiful frieze along the Lyon Street entrance to the Gerald R. Ford Fieldhouse.

But Winter’s work is known all over the world – and beyond. He designed the Apollo 13 “Steeds of Apollo” medallion, which also was used as the mission insignia. His mural “Titans” in the United Nations General Assembly, and his talents adorn the Kansas State Capitol rotunda, the National Wildlife Federation’s headquarters, the AFL-CIO headquarters, and the U.S. Air Force Academy Chapel.

Winter got his start at what was then Grand Rapids Junior College, graduating in 1928. His cartoons and artwork appeared in the 1927 and 1928 yearbooks.

He later studied at the Cleveland School of Art and the National Academy of Design in New York.

The frieze on the fieldhouse, “The Legend of Grand Rapids,” is made from marble from Italy’s Mount Altissimo and completed in Winter’s studios in New York and Italy.

The work depicts Michigan history, mythology, industry, education, and culture, and was completed in time for the dedication of the fieldhouse in 1976. Winter was honored with the Distinguished Alumni Award.

Winter, who passed away in 1982, is considered one of America's most respected muralists, but he also completed portraits of leaders including four popes, Cardinal Terence Cooke, and Amelia Earhart. He was a guest at the White House and the Vatican.