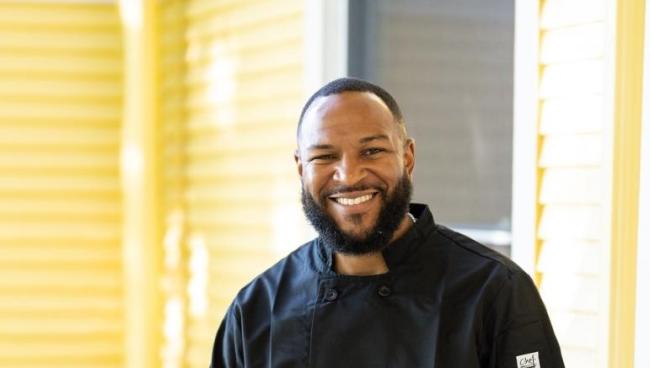 Jan. 9, 2023, GRAND RAPIDS, Mich. -- Steven Couch’s lessons at GRCC’s Secchia Institute for Culinary Education prepared him for a career at the stove … and in front of a TV camera … and in an office.

Couch came to Grand Rapids with a bachelor’s degree in dietetics from Michigan State University after a year working with AmeriCorps. He wanted to combine what he’d learned at MSU – preventing chronic disease through nutrition – with the culinary arts.

“Even though my whole adult life I have loved food and nutrition, which is why I studied dietetics at MSU, it wasn’t until I learned to apply that knowledge to food cookery and presentation, inspired by the unique and world-class chef instructors, that I found my true calling as an entrepreneur and chef,” he said.

With help from a GRCC Foundation scholarship, Couch could take advantage of unique opportunities in the culinary program.

“When I got the Amway hotel scholarship – I applied for it and got it – it was 2,500 more reasons why I was able to achieve my dream,” he said. “And it wasn’t about the money, it was about ‘now I can do the things that I’m really supposed to do – I can make purposeful decisions.’”

Couch was one of seven students selected to compete in the World Culinary Grand Prix in Glasgow, Scotland. The competition, sponsored by the World Association of Chefs Societies, features six teams from around the globe preparing and serving a three-course meal. Chef Angus Campbell, now retired from GRCC, coached the Secchia students.

Couch counts Campbell as one of the greatest influences on his career.

“My ability to work efficiently, communicate clearly and own true to my commitments were all from lessons I learned during my time as a student in his classes,” Couch said.

The Grand Prix introduced Couch to the pleasures of exploring the world through culinary experiences, as he and his teammates visited London and Paris, in addition to Scotland. One of his favorite GRCC memories comes from that trip: eating with his fellow students at chef Gordon Ramsey’s restaurant in London.

“I just couldn’t believe how good the food was – not just some of the food, but all of it,” Couch said. “There were no lame ducks: It was true excellence in food and service. It was the best meal of my life, shared with the best team I had ever been a part of.

After earning his Associate of Culinary Arts and his personal chef certificate, Couch kept busy working as a chef throughout the United Kingdom, including the iconic St. Andrews Links golf course in Scotland, competing on “Guy’s Grocery Games” on the Food Network, and launching his own business, Mr. Eat Right.

A chance conversation with a fellow passenger during a 2017 flight to the Caribbean took him in a whole new direction. The passenger ended up recruiting him for his year-old construction technology firm.

“He said he was impressed with my ability to deliver both hospitality and care in business relationships and wanted to bring that skillset into his firm,” Couch said. “Four months later, I relocated to Los Angeles, moved into his ‘startup house’ and became employee No. 1 at BIM Designs Inc.”

During his nearly five years with the company, he served in positions ranging from project manager to account executive to head of sales and marketing, helped generate $13 million in revenue and opened three offices nationwide. The company now has more than 60 employees in 10 states.

He doesn’t plan to stop trying new things and or saying ‘yes’ when an opportunity comes along.

“I believe you can lead a horse to water, but it’s his thirst on the inside that makes him drink the water on the outside,” he said. “And it’s never too late to develop a thirst for life!”

Start your story today at apply@grcc.edu