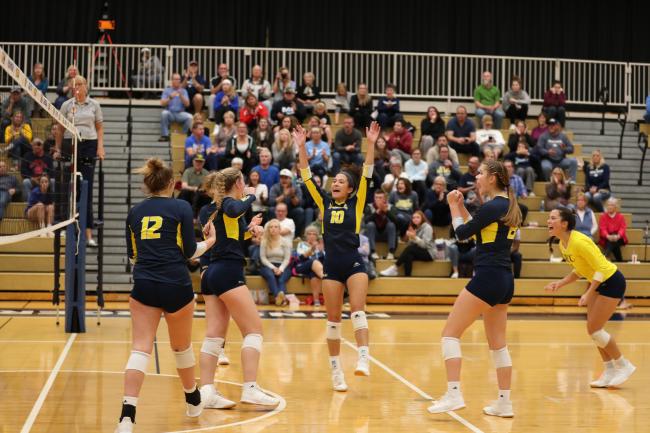 May 22, 2020 GRAND RAPIDS, Mich. — Grand Rapids Community College has earned the 2019-2020 Michigan Community College Athletic Association Charlie Chanter All-Sports Award, which goes to the college program most successful in a variety of sports.

The trophy is named after Charles Chanter, a GRCC Athletics legend who passed away last year.

“The All-Sports trophy is a reflection of the strength and hard work of our students and coaches across the program,” GRCC President Bill Pink said. “We’re proud of our student-athletes and their success on the court and in the classroom. And it is especially meaningful to earn a trophy named after someone who devoted his career to GRCC and its students.”

The Raiders were boosted by winning the Western Conference and MCCAA volleyball titles.

GRCC’s volleyball team has been dominant, earning the state championship in seven of the past 10 years, including four straight seasons. Danielle Johnston earned All-American honors, the fourth consecutive year a Raider player has been selected.

The team starred in the classroom, too, with a 3.66 team GPA – the highest in the program’s history. The team had 12 athletes finish with a GPA of 3.0 and higher, with 11 earning a 3.5 or higher and two finishing with a perfect 4.0.

The men’s and women’s cross country teams had successful seasons, competing in the NJCAA Division I National Championships in November. For the women, it was their first time in program history racing as a team, and they finished in 23rd place out of 38 teams. The Raider men had three runners compete.

Freshman golfer Tyler Hausserman was named to the Division II Central team by the Golf Coaches Association of America. Hausserman was ninth in the region with a 76.64 scoring average.

The men’s basketball team reached the district semi-finals, and players Herman Brown and Darien Banks earned postseason honors. Brown was named to the Third Team All-Conference squad and to the five-man All-Freshmen Team.  Banks was named an All-Conference Honorable Mention.

The women’s basketball team finished third in its conference and reached the District Tournament’s semi-finals.

GRCC has won the Charlie Chanter All-Sports Trophy 16 times since its inception in 1958, and last earned it in 2013. Chanter was a longtime golf coach and teacher, and served in leadership positions at the state level for more than 40 years.

Chanter began teaching at what was then Grand Rapids Junior College in 1954 and retired from full-time work in 1994. He taught in the Business Department and was its chair at one point. He continued teaching as an adjunct and remained golf coach until 2007.