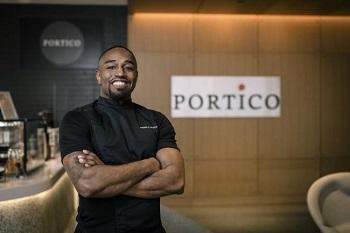 For Trimell Hawkins, Grand Rapids Community College’s first Young Alumni Award recipient, GRCC "is more than a school: it's a pathway to the future."

The new award recognizes alumni ages 40 and younger for their community or civic contributions, service in support of GRCC, and exceptional accomplishments in their profession.

Since graduating from GRCC’s Secchia Institute for Culinary Education in 2015, Hawkins has put his personal stamp on menus throughout West Michigan. He credits the foundation the culinary program gave him for his success and says the “quick fire” challenges were one of his favorite things to do.

About the Young Alumni Award

The GRCC Young Alumni Award will be awarded to an alumnae or alumnus who is under the age of 40 as of Dec 31 in the year submitted. This award recognizes an outstanding alumni who have distinguished themselves at this stage of life through:

The Young Alumni Award was created in 2021 and will first be awarded in 2022 to recognize GRCC Alumni identified as being outstanding in their professions and to present such alumni to current GRCC students as examples of exceptional achievement and hard work.